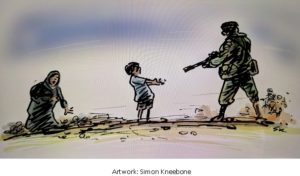 +++This was the third day of protests and the editor for Israel News Today had invited, no ordered, me to cover it. For three days Palestinian families had been sitting on the road blocking bulldozers from entering and demolishing the village that had been their home for centuries.

+++A non-violent protest, what is there to report from a non-violent protest I asked? “Tomorrow’s headlines…” I said rather dramatically to the editor, raising my arm to highlight unseen headlines in the air, “Palestinians Quietly Sit on Road”. It was going to be a long day. When I arrived the soldiers looked bored, no stones being thrown, no one to shoot, no tear gas required. I could see my friend Joseph, a soldier doing the last month of his three-year national service for the Israeli Army. Joseph’s sister, a nurse, was killed last year when a suicide bomber chose the bus she was traveling on to detonate his protest of the occupation of Palestine. Hamas had claimed responsibility. I was the first reporter to reach the scene, and Joseph in the first vehicle of Army personnel. I covered the funeral too. Since her death Joseph had demonstrated that he had a promising career in the Army should he choose to continue in service and accept promotion.

+++Anger and contempt were palpable as he glared pure hatred at the protesters, no-one doubted he would use his gun given just the slightest reason to do so. He intimidated people, that too was evident. Suddenly a woman’s screams shattered the silence, the soldiers lifted their guns in response to an unknown danger, she screamed a boy’s name “Abbas! Abbas NO!”. I jumped up and looked in the direction of the frantic sounds. A small boy no more than five or six years old ran toward the armed soldiers. I could almost read Joseph’s thoughts as he saw an opportunity to take an eye for an eye, why not there is no accountability for soldiers in this war. The child stopped in front of Joseph and took something out of his pocket as the soldier placed his finger over the trigger. There was silence as the crowd waited to see what would happen. The woman who had called to the child stood frozen in anguish, one hand over her heart and the other grasping the arm of the man standing next to her. The child’s hand, so small in comparison to the big strong hand poised ready to shoot. Abbas didn’t seem afraid as his innocent eyes looked into the eyes of hate, and he silently offered Joseph a small token, a handful of dried figs collected from his family’s orchard.

+++It felt like an eternity had passed before Joseph lowered his gun. He stared at the gift as if he had never seen figs before. Later he would tell me that in those few figs he saw his childhood before anger, hate and fear began to destroy the happiness within him. He recounted how he would climb olive and fig trees with Palestinian children in large orchards, filling their stomachs and baskets to capacity on the fruit of ancient trees. And in the innocence of childhood, seeing no difference between Palestinian and Israeli. Joseph’s father would sit in the shade with the children’s fathers and grandfathers sipping spiced tea discussing the events in their country until a sadness came over them and they would change the subject. With sorrow, he told me that one harvest season he went to play but the children and the trees were gone. New buildings with high fences replaced them, and the Jewish children were too afraid to play outside the fences.

+++Joseph lowered his gun and looked into the eyes of a child who, like him at that age, saw no difference between them, but would also learn to hate. Joseph knew this moment would change his future. He was tired, didn’t want to be fighting anymore, shooting protesters trying to keep their homes and land, locking them up in gaol because his people were afraid of the child’s people. For too long he had been part of tearing families apart by invading their homes in the dead of night and taking children for throwing a stone at a tank the day before, or some other perceived threat. Joseph began to understand that the fathers and grandfathers in the orchard just a few years ago must have known what was to come for the next generations.

+++So I was wrong, there was a story to tell that day. But it didn’t make headlines, in fact, it didn’t make the news at all. Headlines last a day, even less sometimes, but the story of Abbas and Joseph continues to be told in every meeting place in the Occupied Territory as one of hope, but in Israel as one of how a soldier betrayed his role and people. Joseph left the Army and found courage, without a gun, in a much harder cause, that of advocating for a peaceful solution to the conflict.