A Slide into Totalitarianism 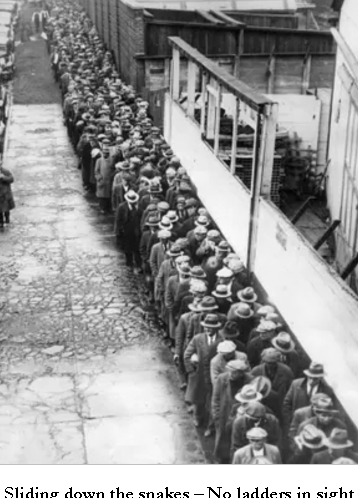 In the Blink of an Eye
1I sit here in the early hours, not far past the other side of midnight, wondering about a man’s, a woman’s good name.
1
Good name. What the hell does that mean in a time of societal collapsing?
1
You could do a bit of hermeneutical musing, but would that produce any Truth or just loads of relative truths produced by all other “theologians”?
Some how, good name seems to be associated with one’s spirituality, or being. Now a person’s state of being is quite a bit easier to observe because behaviour is one good marker. Behaviour is multi faceted of course.
1
The great religious wisdom traditions of the World have a lot to say about Being which can be of great assistance when trying to work out for oneself – the forming story of what sort of person do I want to become and what sort of road do I need to tread to help me get there.
Another one of the great questions of life that every person has to answer during the adolescent years, leading to the change to adult wholeness along the way to one’s death, hopefully after a well lived life.
1
One cannot miss being caught in the tragedy of death, celebrated in ceremonies of farewell to the departed, but swelling that tragedy if shame is also a legacy carried away by the mourners.
Shame that people, but especially family members have to carry and try to atone for in some way, or live with societal disapproval – for how many generations?
1
During this current period of slide into totalitarian ideological fanaticism, (which turns out to be a secular form of spiritual madness) much evil is being generated and it seems, the horsemen of tragedy are destined to gallop that path for many years to come; and many names will be lost.
Presumably the Song of Names will have many more stanzas and require many more singers.
1
Hopefully one does not fall prey to losing one’s name.
1
For the Christian pew sitter, a suggestion might be to look at the spirituality of the Galilean Peasant you follow. – ‘Jesus before Christianity’ by Albert Nolan might be helpful.
For the non-religious, a recent book by Mattias Desmet “The Psychology of Totalitarianism” is worth the time to read.
++++++++++++++++++++++++++++ * * *
1 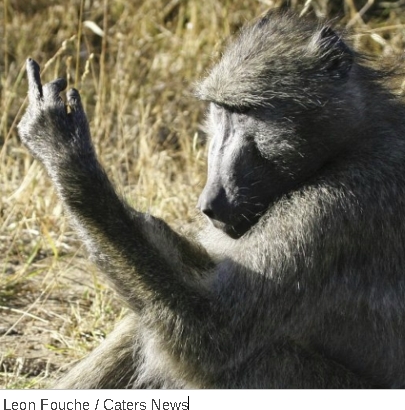 Rancour in its Head
1In the old Hebrew idea of time (quality time) we might say that we are in a time of conflict.
1
On the other hand we might say that it is the best of times as the great Cosmic Mystery (God, Allah, Krishna, Tao, etc, etc) is starting to show its hand.
1
In the Christian way of mysticism and prophecy we have but four stories, each one shining its partial light on Truth.
What do we have today, particularly uncovered in its rawness? – we have the Narrative which is an ongoing saga of anything goes: any lie or misrepresentation or fear mongering technique to keep Dark the spiritual madness of the technocratic/trans-humanist ideology and the priests and priestesses of the church of world domination.
1
What seems to be left of the Western tradition of the Institutional Christian Church, is a small collection of mainly emotion centred groups putting out a midrash-ed fundamentalist story that the young cannot give allegiance to: with the spiritual centred groups still putting out the same story that has been on the endless loop tape which has been playing for the last millennium or so. What has kept that machine powered is the ability to devour the mammoth assets built up by generations past, keeping the clothes of the Episcopate brightly coloured and their tables overflowing.
1
But now, the secular Church of Rationalist Scientific Materialism seems to have started hitting a brick wall, with vicious fanaticism (rancour) rising like a mushroom spectre. The problem is, as Hannah Arendt is quoted is saying, their cyborg utopia looks like hell, and they are only at the early stage of their journey.
1
We can talk about bringing these perpetrators to justice through the mechanism of law with its eternal time frame, but criminal enterprises seem to be only brought to ground through the exercise of force. Hence we are now in WW III, which like previous margues of the same brand will only end in the defeat of one side or the other, or the extinction of all.
1
For the pew sitter; keep your eyes and ears open, looking for any evidence of an awakening in the whited sepulchres and if and when you see it, throw your total support behind it. The current wave of mass hypnosis will call you to your death otherwise.
1
And make no mistake, inattentional blindness is a killer. Like Jesus of the first of the four stories, you are left with the “I” unless you can grasp that “AM” being offered through passionate relationship with the spirit of Mystery.

Peace be with you. 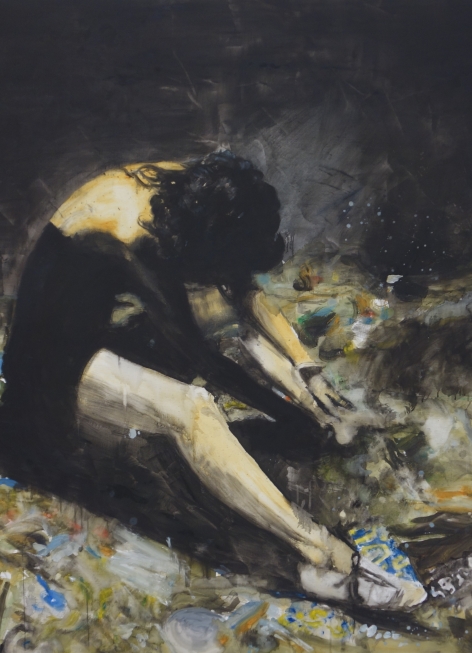 I’m finding it all too hard
1 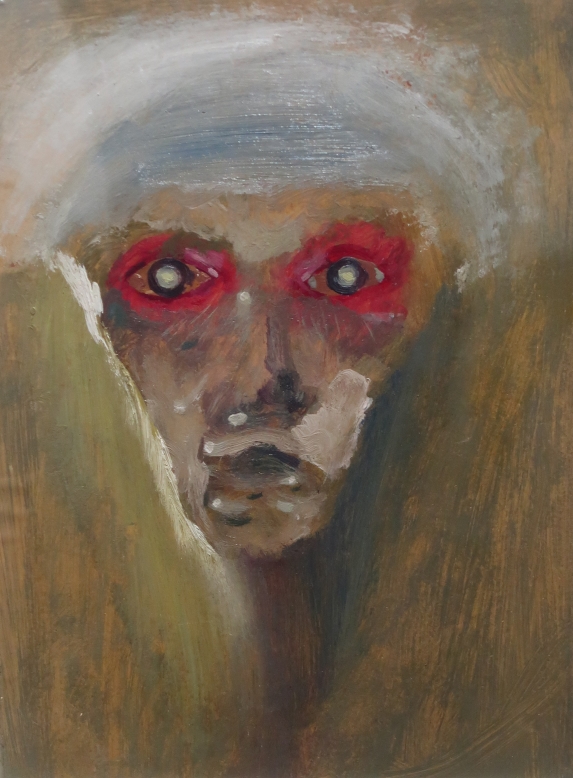 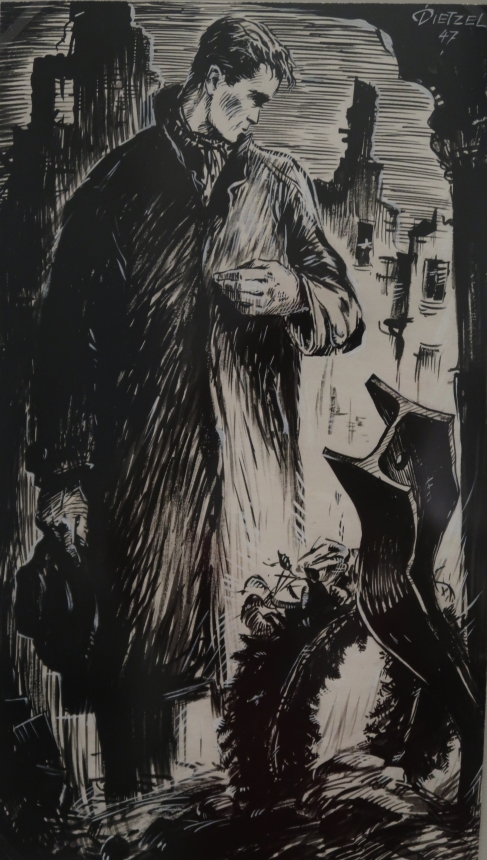 Back with Bernie again, however this time it is in Berlin of 1938 and the business end of the NAZI tyranny take over of the Police.
1
Bernie had left the Murder Commission four years or so earlier (resigned before being pushed) due to the demand to follow the political line – Join the Party or become redundant – permanently!

Bernie, being a social democrat, took the second path and went private. – Not married, no kids, no mortgage, no debt of any appreciable size; but was any of that really the reason underlying his choice?
1
Although the author Philip Kerr doesn’t explicitly state it, Bernie hadn’t lost his humanity and more importantly his moral structure. Albeit, the need for justified killing (well staying alive) was not far from his capacity.
If we remember from our modern history classes, Germany from the early 1930’s had fallen into a state of mass psychosis where it became in effect a follow the leader dictatorship.
The problem was, that with the expulsion of those police who did not follow the party line, the ranks were filled with second rate performers and thugs and as a result actual crime increased while reported crime decreased. The new police got in on the crime act as well. Trouble was, when a politically embarrassing series of horrific crimes erupted, there were no officers of the highest calibre left who were needed to solve the cases.
1
Bernie gets a Gestapo invitation to visit General Reinhardt Heydrich, chief of the Reich Security Main Office and off to the races we go. Trying to solve the crime, while himself staying one step ahead of the moral monsters and their preferred method of crime control – a bullet in the head, or having it chopped off, or having a visit to a concentration camp, – is the caper. His trouble of course was, how could he trust leaders like that and similarly, how could he trust the people he had been given to work with and for him. And of course, they seemed to hate his guts as well.
1
I think that today he would be called ‘not a team player’ or ‘herd adverse’, or … , or something. – Oh! The Jews had already been eliminated from the serve / game by then as well.
1
This book was one of the first that introduced Bernie and his travails with mid 20th century German fascist tyranny, to his many dedicated readers. This is little wonder as it sits so easily into recent Western life experience, triggering strong emotional understanding and connection.
1
For pew sitters, it is a view into a further nail in the coffin of European Christianity.
1
The Fuhrer leader, through the agency of his propaganda minister Reichsführer Joseph Goebbels, set out to destroy the Roman control over the German Church, not by overt murder or physical suppression, but he intuited that when push came to shove, the prestige, pay and perks of the religious community leaders and their followers would be enough to run them to ground.

This little book is a real corker and for anyone who hasn’t met Bernie yet, starting off with the Berlin Noir trilogy (of which this is the second) is a great way to commence. Be warned though, you may finish up becoming a fanatical follower.
1
Oh I forgot to mention, you even get to meet Reichsführer SS Heinrich Himmler in his guise as a patron of a satanic cult within the senior SS hierarchy. What a ride! – Well before its time, or perhaps Kerr had a bit of the second sight himself. One wonders what he might be thinking of the last two years from the vantage point of his grave?
1
Opening quote in the book:

“Much about your good people moves me to disgust, and it is not their evil I mean. How I wish they possessed a madness through which they could perish, like this pale criminal. Truly I wish their madness were called truth or loyalty or justice: but they possess their virtue in order to live long and in a miserable ease. – Nietzsche”